Thank you Rhett for understandin!

My family and I are immigrants from Czech Reoublic. As I watched today's ep I want to thank Rhett for realizing that Czechloslovakia is NOT, NOT a country any more. Whenever I say where I'm from people always twist it around and say" oh you're Czechoslovakian"!! Back home we do make bon fires to burn witches; I actually nver knew that I'm as creepy as setting out a un attended fire and Walgreens chair for my dead relatives who are buried half way around the world!LOL and thnx guys.

Up To This Point poster spotted in replica Toy Story room!

Here's a Buzzfeed article showing a replica of Andy's room (of Toy Story)!  I was looking through the pics and spotted an Up To This Point poster!  Pretty cool!

Rhett and Link have stated on numerous occasions that their wives, Jessie and Christy (respectively), don't want to appear on GMM or have a major role in their videos. However, both wives have made some cameos in the past. For the curious Mythical Beast, here is a master… I'm LOVING the sketches from Sketchtober this year! (assuming they keep doing it in the future)

The most current one, "BFFs", made me laugh and seriously cry real tears towards the end! It was so powerful!

I've been watching GMM/Rhett and Link for a solid 3 months now and I'm so happy these guys are having fun making their videos. It shows that they really love what they do and have not been afraid to share their work with the world. It's so brave to do that these…

Do you ever think about how many times a day your mind jumps from one topic to the next? What about if you should go talk to some one or wait to see if they will talk with you? What would happen if a zombie bit a vampire? or vice versa? How many times have you started writing a story, song or poem in your head but forget it when you try to write it down? How many times a day do you wonder things? How much should we wonder in a day? Do we wonder about the same things? 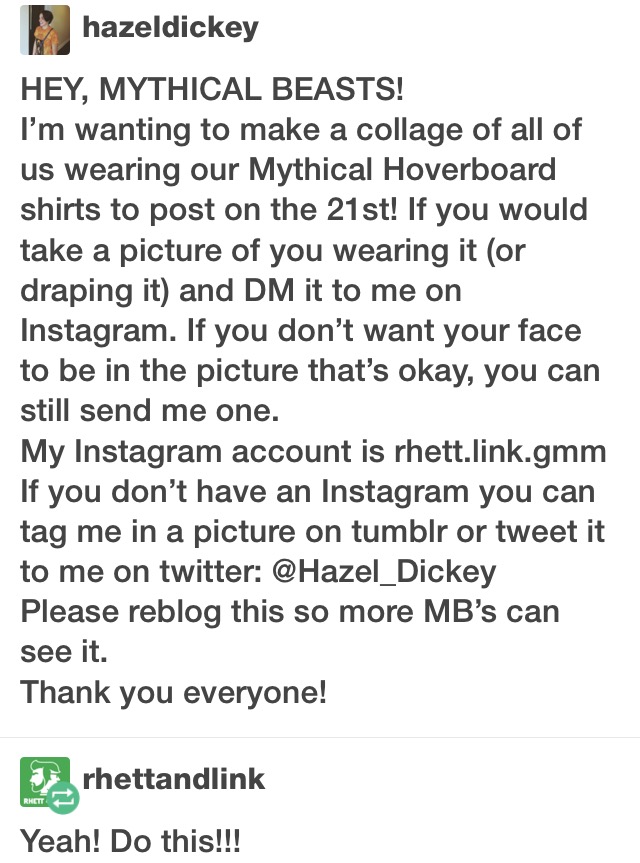 Allow me to reiterate a bit... If you do not feel comfortable showing your face you can still send a picture without showing your face, I'd also be okay if you put the shirt on your pet or something like that... If you can't send the images to my instagram,…

On dreadful night of wind and rain, my body wracked with aches and pains
In my death bed I lie dying in a candlelight's dim
When upon my window I saw a shape, a beast of feathered black cape
My mind spun dizzy yet knew it was him
In my mind I knew it was him
"Nevermore" I said with a grin
.
His eyes of black beckoned my soul, his grave cries hoarse and cold
Quickly filled me with a sense of horror and of peace
At once I knew somehow I knew, that this dark…

So... I decided to give it a try, just for fun! I hope R&L find a way to expand the language options for captions in their video. I'd be very happy to help them. In the meantime, I translated Episode One from Season 8. Hoping some italian mythical beast will enjoy. Well, I guess if you're here, you probably know a lot of english.. But, anyway, here it is.

I was walking by myself and I was getting closer to a house. I began hearing music and it turned out to be a band. They sounded great and all but their lyrics were just awful. they decided to take a break but they left their garage where they were practicing open so I…

What do you get when a tornado picks up a snake, a lion, a horse and an eagle?

One of two things. The first is a confused and disturbed snake, lion, horse and an eagle, and the second is the outcome from all four colliding. This produces a creature which doesn’t really have a name, therefore … are just called … uh … flying beast things … uh yeah.

The flying beast thing … is well … um. Odd. It has three snake heads … the fore body of a lion … rear of a horse…

Sup guys! I'm a country girl from Kentucky trying to find my place in this world. I'm a country music lover and a God lovi'n girl. Hope you'll like me and accept me as a good Mythical beast! Thanks! …

Puff the Not so Magical Dragon

Puff was a dragon. Not one of these magical kinds who live by the sea or in the lands of Honah lee, but the kind that lived in the forests of Aldershot (which is a town in Hampshire, England), in a tree house decorated with a hole array of fancy treasurers such as sealing wax and a silver plated calligraphy set.

Puff spent his days watching the local barracks.  His favourite place to watch was the parade ground, and on one ‘sunny’ Aldershot day he watched these event…

There once was a cat. She was grey with brown patches upon her fur, and had hazel eyes and a large patch over her right eye, and received the name patches. She lived in a small town in North Carolina called Buies Creek.

Patches was a Cat like most others; she liked to sleep and to adventure the local woodland as well as getting up to mischief. However on one hot North Carolinian summers day, Patches was hunting birds and slowly began to get very hot a tired, and decided to find…

I just stood there. My blade dripping with blood. The blood puddle that had formed glistened. My head pounding from the blood rushing through my veins. Looking at my creations I grinned like a mad men. I was so proud of myself. I had accomplished everything I dreamed of. Slowly the sun came creeping through the windows. When I started to walk away, I had a sudden realization. It suddenly hit me what I had done. I had done something terrible and it…

There was a cave, this was a cave like every other in the twenty first century Scottish Highlands. Within the cave dwelled a beast made of shadow. A local village named this shadow Dea Loca, which translates to mean Shadow Serpent.

My Dad Claimed he saw a UFO That Looked Like A Stick of butter And Later Airplanes Were Flying In a CrissCross Pattern Looking For What He Saw I Belive i Found A Photo Of What He Saw NOTES: IT WAS 10:00 IN THE MORNING HE WAS AT WORK

The Uplifting Effect of Rhett and Link

I am a woman who suffers from many severe psychiatric illnesses. Most days I wake up in physical and emotional pain from a life full of challenges and abuse. But now, every weekday morning Rhett and Link give me joy in the morning so I have the drive to get up and face my day. I have  very little friends because I am so antisocial but, Rhett and Links clean comedy brings me a little bit of laughter, fun,and distraction every day.

It was my birthday on Thursday and my mom ordered me…