The group of fans Rhett & Link in a social network "VKontakte" is opened.

Greetings! I wish to inform that community Rhett & Link in a social network "VKontakte" is opened! This community will allow to acquaint the Russian public with creativity Rhett & Link. http://vk.com/club18005518 is a reference to group. Let you are not confused with quantity of people in group - it has been created recently. If want, can see me "VKontakte" http://vk.com/ty.grey is my page.

I realize it has been awhile since I have busily been working on the ReKaps for the archives/reKaps. Thank you for reading and checking for my blogs!

After many many hours of watching the important moments, I realized that I can only cover the Kasts (meaning I had to exclude: youtube videos, flicker photos, etc). Last week, I finally finished combing through all the kasts from 2009 (and believe me with Rhett and Link's… Continue

Picky Eating and the Case of the Insensitive Taste Buds

My cousin (who is a very picky eater) insists that people who are picky eaters have super-sensitive taste buds, enabling them to taste bad flavors that other people can't. However, I'm not convinced; I think the reverse could be true as well.....

It is my opinion that people who are not picky eaters are the ones with super-sensitive taste buds. I don't consider myself a picky eater, and I base my theory on the fact that some of my favorite foods… Continue

Picky eating takes over taste buds of millions of people here's what I think:

1. This is the number one reason I think is for picky eating: bad experience. Say, you dislike carrots. Well, chances are, when you were young, all your parents did with carrots buy them frozen which kills alot of flavor, steam them, put on salt, then serve it as a side dish. That doesn't add much flavor and all you taste is carrot, and salty nutrients. Not very appetising. Or…

I was talking to one of my teachers about this a few months ago. We were talking about why little kids tend to hate veggies. My teacher said that toddlers don't really taste much. They can taste the difference between sweet and bitter, but most of the time things taste bland to them. They tend to like the foods that they see others eating. If a parent leaves the kid veggies to eat but then eats a big mac, the toddler is going to want what the parent is eating. Also, of they see their parents… Continue

Well... Corey Kramer (Ghost Chicken) letting you all know it's that time of year again... Comic Book convention season has started! Just letting all my fellow mythical beasts know that I'll have a booth at the Midwest Comic Book Association's Spring con this weekend (May15-16th)! So iff'n you're in the Twin Cities this weekend, head on over to the State Fair Grounds and soak in alla the Comic Booky goodness! Stop by my booth and mention you're a Mythical Beast for a free sketch! Check out… Happy Mother's Day to all of the Mythical Moms in the R & L Kommunity!

I think that some picky eating habits devlop as we grow. as kids there are many foods that we don't like but grow to like as we get older. and some that we eat over and over even if we don't like them and after time our taste buds change so that we are able to like them But there some foods that we have never liked and probly never will. But why ? I think that what we like to eat and what we hate to eat is much the same as what color we like and what color we hate. it is something we are born… Continue

I like to think I am not a picky eater but some foods are not favorite. I am not a huge fan of samon, although i have had it done in a way that I liked it. what I do not like are bones, skin, fat, etc...

Picky Eating: The Attack of the Gag Reflex

As long as I can remember, I have had a reputation among my family for being one of its pickiest eaters. Whether it was macaroni and cheese (which was for some reason tolerable without the cheese part), butter, or green beans (still a hated item), there was always something on the dinner plate that I just refused to eat as a child. Many a PB&J did I eat back in the day.

Today, the horizons of my world of acceptable foods have somewhat expanded. However, I am still a bit of a purist… Continue

As most of you know, I spent two and a half months in Thailand. I was teaching at a small university in Bangkok in their Department of Music.

The coolest part of my trip was participating in the culture, and that includes the food. I ate so many things I never thought I would ever eat in my life.

One of those foods I thought I would never eat was squid. The kind with the little tentacles. YUCK. But--I faced my picky eating habits, and I ate the squid--with the little… Continue

I know I already posted one blog today, but we'll just say this makes up for all the times I haven't posted. All I really want to say is that this has been a good year. I am moving out of the dorms Thursday, leaving my sophomore year of college behind. But I feel like I have learned so much, especially this semester, and that I am really starting to take some steps in the right direction. I am so happy I have such an awesome roommate! And that I have an amazing boyfriend. Without either one,… Continue

I said I was going to continue with Heavy Metal and the Middle East in my last post, so here it is. Actually... I think I will just copy and paste the written up version of my speech I did in class. Just as a warning, there was some strong language in one part, so it has been edited, but I still want to apologize if it is offensive to anyone. I think it is still a bit rough, and when I actually give the… Continue

I have a stash of empty plastic bottles and burned out light bulbs that I use to make into a variety of sculptures. Here's a collage pic of two of my Recyc-a-lite bird sculptures named "Blueberry Cheeks" and "Pip." Some fans at my facebook page helped me name my little critters. 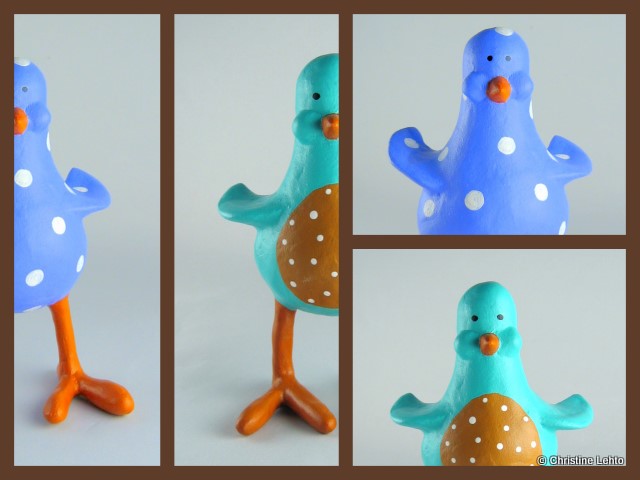