My Interview With Rhett & Link

Rhett & Link talk about the return of  Good Mythical Morning. Also discussed, Getting more exposure, Questions from Mythical Beasts, Plus the possibility of a R&L line of wigs and much more... 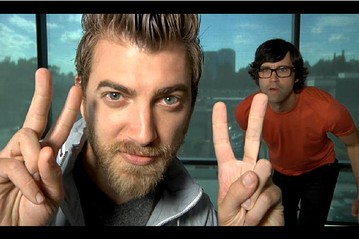 I have a mythical idea. You guys could make  THE MYTHICAL APP! I…

I discovered Good Mythical Morning about two months ago and have been catching up ever since. I watched How to Find Your Lost Phone yesterday, as soon as Rhett started talking about losing his phone in the car I knew where he would find it because that morning I had dropped my iPod in my car in between my seat and center console. Mind you, I have never lost an electronic device in that way before that morning. It blew my mythical mind!

Rhett and Link, please tell you know about the…

well, school once again has come to end the summer, and this year im trying out virtual school so hopefully it goes well... anyway if anyone is reading this I know its not R&L related but if you are a fan of Battlefield and want to hear new info and see sneak peeks for BF4, check out Battlefield Podcast on youtube. He's a friend of mine and deserves more subscribers Thanks! Here's their link …

Haha. Today i had to go to the orthodontist office and get in my appliance on the roof of my mouth. It totally sucks.i saw some of my friends a little earlier today and i had a lisp and they were making fun of me!!! And i was like SHTOPIT!!! And they would go, say it again! Man i dread school tomorrow. Because not talking is gonna be a real problem for me.

Ballad Of The Beast

Eliminate the flow of lies spewing from my throat. Caw like a flying

RandLer waiting to reach the ground. Waiting for...

you, waiting for you to show them the way.

Unicorns and Manticores thinking they're best of all, but tonight is the Randler's…

My bookbag is, like, stuffed and I haven't put any textbooks in yet! What am I gonna do.

I Get To Interview Rhett & Link!!

First I just wanted to say thank you to all the Mythical Beasts who have been so kind in welcoming me to the Rhett & LinKommunity. It is fun to be a part of something so cool. 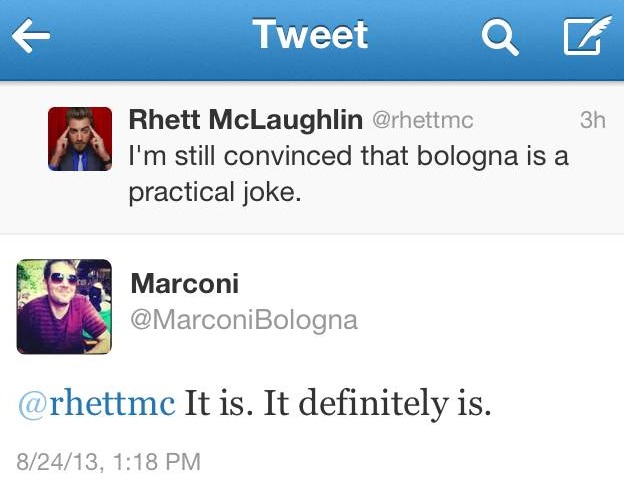 I am excited to have the chance to speak with Rhett & Link tomorrow (Monday 08/26/13) for my network radio show and iHeartRadio podcast.

I have had a question on my mind for a while but I never got around to asking anyone about it, until now.

If you could please answer it I would be grateful, because knowing the answers from some of you is what I most want out of this...

Someone like Rhett or Link has obviously made a difference for some people's lives and helped them through stuff that is hard. I think every mythical beast here has that in common, but there is probably other people or…

Can I just say.... I feel a R&L app would be highly useful for the Kommunity!

https://www.youtube.com/watch?v=11sjjgGyWwY Mythical Beasts @ LA MythiCon 2013 and their GMM Intro!! So incredibly thankful to Rhett and Link for showing up and meeting us and signing EVERYTHING. :D …

Mythical Beasts @ LA MythiCon 2013 and their GMM Intro!! So incredibly thankful to Rhett and Link for showing up and meeting us and signing EVERYTHING. :D It really meant a lot to us and its, for sure, something all of us will never forget! We love you! <3 You have lifelong viewers and beasts in us!!

Are you the knd of person that likes to be the star of the show or do you like to be away from the spotlight?Do you like comedy do you like drama do you like action?Would you want to become a celebrity that's famous?

Tell me a little bit about yourself at my page.Sincerely, John Howe

Why is whipping hair so attractive and addictive?

I think Youtube should create something where famous Youtubers explore Youtube and watch videos from people that aren't famous "yet".Then they would subscribe and like maybe comment probably shouldn't but their choice.Such as for example "Rougemailmanfilms"(my best friends) hasn't become famous as I said "yet".I was wondering do you think we can make this work? Sincerely, John Howe

Hey it's John I think youtube should create something where famous youtubers explore youtube and watch videos from people on youtube that aren't famous "yet" and then you like and subscribe to them.Such as for example "Rougemailmanfilms".I was wondering could you make this work mythical beasts and Rhett and Link?

trying to get video to work

I know this is too late for the actual event, but it can still happen after the fact.  Just now got the idea after seeing Maddie Cooper's updated profile…

Almost finished GMM Promo! I took all the shots and put them in a video where each shot goes for 0.1 seconds. I think I'm going to have to change it to 0.15 so the song in the back round doesn't cut off short which is going to be a pain because you can't change all the shots to 0.15 you have to change each indiviual shot to that for some reason and i have 270+ shots. Oh well I'm still enjoying myself. All I have to do is change the time of shots, put music in, put a little words about gmm…

I am working really hard on putting screencaps of all gmm episodes as a promo for bringing gmm back sept 3rd. ive done 150 shots so far!

Feels Good To Be Back

I'm baaaack. It's been too long D: