Hello Beasts! New blog post up, even though I did one last week. That one doesn't really count though, cause it was a special report. We're back to the bi-weekly thing... if it's a thing.

Like always, I'll start off with school. Nothin much goin on, to be honest. I have a debate in English, and I'm TERRIFIED cause I'm scared to talk in front of crowds. The California High School Exit Exam is coming up in two weeks, and you have to pass it to graduate. I have…

is it possible to buy the t-shirts from t-shirt war? cuz i would rock those everyday!

Of Hatred and Intolerance (Note: there be bad language here)

A friend of mine blogs over on wordpress and his last blog got me to thinking about certain elements of my overall religion. I wholly recommend you read his article it's full of smarts that you won't find here. The article he wrote is here: http://benephobia.wordpress.com/

So onto my rambling, warbling tirade.  My target today is the Westboro Baptist Church and others who are like them. As I wade through the vile filth that is…

HELLO BEASTS! Yeah, I know it hasn't been two weeks (if the bi-weekliness is a thing) but I had to blog about this. As few of you know, I went on a trip to San Diego this past 3-day weekend. I have never been there, and my parents decided to go to the World-Famous San Diego Zoo. We get up on Saturday, drive 5 hours (me snoring in the backseat most of the way) and we arrived in... rainy San Diego. Kind of a letdown, but it'll clear up! There were some tensions cause our GPS decided…

Summoning of a new Mythical Beast! (A little bit about me)

So for those of you mythical beasts who have been on here for a while, you know what is going on. For me, I am a newly born beast without mythical antlers or fur yet. I come from Eastern North Carolina in a little town outside of Jacksonville NC known as Southwest. Yes, I live in a place where only this mythical beast can cover all cardinal directions without the world exploding into a bunch of tiny pieces. I am from Southwest in…

On other people and my flaws.

So I sit here having just finished helping with an Alpha Course session, how did it go? Not good, or at least not as good as I'd hoped it would. The talk given by Nicky Gumble was awesome, gave me an insight into the Bible I've been needing, a clue as to what I should be doing with a 2000 year old book, but the discussion with our small group was a tad dispiriting. For one I made the biggest mistake of all by offering an answer to a question as if it was THE answer to the question. For one I…

You can fallow me on google buzz! (if you call it fallowing) any way, here is a link: http://bit.ly/eezJrG

So as I sit here listening to a single episode of a podcast I can already see I'm going to be following for a while to come, I think about why I'm listening to it in the first place.  It's a Christian thing and it gets me to thinking about faith and religion and importantly the difference between the two. It's so easy for folks to lump faith in with the problems of religion and assume that because one has made some mistakes in the past, that the other must therefore be…

Hello Beasts! New blog post up NOW! It's been about two weeks, so it's due. If the bi-weekly post is a thing, I mean.

Nothin much to talk about schoolwise. Everything's going as it usually does.The guy who sits next to me in Spanish 2 Honors has been teasing me a lot more lately, he even said he HATED me. He doesn't mean it... right?

Yes indeed, some writing. Not this here paragraph, this is to tell you about the writing. I don't think this is awesome I don't think this is anything but writing, but if you've a mind to some commentary, tips would be useful. Expect typos and grammatical inconsistencies. I'm not good at this stuff, though spellcheck should have caught most of them.

"It's a little cliché to start this with any sentence including the words dark and stormy night,…

And so, a dawn of sorts

This here be a blog post, perhaps of an articulate nature, perhaps of a rambling, meandering mess . My vote is for the latter, but we shall see.

First to things about me: Or is that too much? If you're reading this perhaps it's what you wish to know, perhaps you'd rather hear the inane thoughts of a potential madman. Maybe we'll get a little of both. Huzzah! Anyway. I'm me. Picture is no doubt somewhere about.

I'm not a real Reverend, though that may change in…

A faolnix is a wolf with wings - in this case a pure black wolf with indigo eyes and dark blue tipped black angel/bird wings. I combined one of the names that means 'wolf' with the word phoenix, my other favorite mythical beast, and voila!

medium: chalk and colored pencils on construction paper i hope to have this laminated. sorry the lighting was horrible. hope you guys (rhett and link) like it! ill try to send it as soon as i get it … 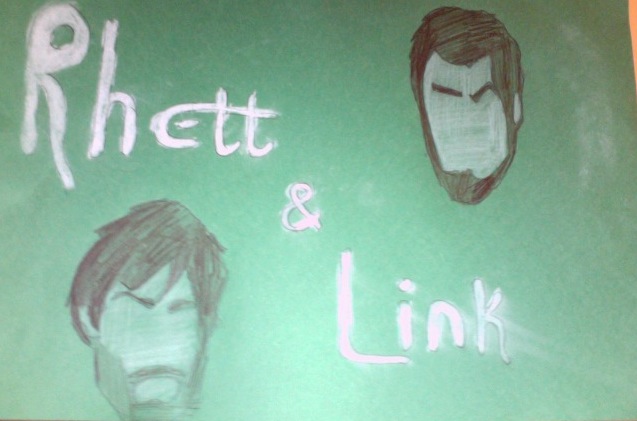 i hope to have this laminated. sorry the lighting was horrible. hope you guys (rhett and link) like it! ill try to send it as soon as i get it laminated!

A few months ago, Ray asked me directly:
"Is the Queen of the Amazon a mythical beast?"

Now, I was unable to answer this, as the question completely baffled me. So I did some digging, some exploring, some cutting through greenery way down there in the Rainforest, and I discovered a simple, but important, fact.

The Queen of the Amazon is a Wood Fairy of the Night.

Now, in case you're unfamiliar…

So I haven't been to school in a week, but cars can finally get through the streets without getting stuck.

The first day after it hit I went on a…

Awesomeness of Chris - The Febvlog 6/2

I couldn't work out how to embed the video here so follow the link below :D


I'm loving GMCL by the way!  When The Chia of Lincoln snuffs it I want GMCL to keep going please :D

Hey folks... Ghost Chicken (Corey Kramer) here... just wanted all my fellow beasts to go check out the Webcomiclist awards for 2010! (the link's down below) Pay special attention to the awards presentation for the year's best "longform" webcomic... as I drew it! Hooray! There's of lots of great webcomics represented there... check them all out... and of course don't forget to run on over to www.remedialcomics.com to check out my comics Remedy and…

Hey, all you lovely lovers of all things awesome!

I've submitted 2 short videos to reddincthemovie.com for the chance to be in an upcoming horror film from the UK. However, I need YOUR VOTES in order to make it to the top 10 to be selected from! If you think I do a convincing job, PLEASE RATE the videos as 5 stars, and if you want to be even MORE awesome, you can share it on facebook with your friends!