this is my first post as a mythical beast i am proud of it i have been watching Rhett and Link and GMM for quite some time and have finally chosen to join i hope you welcome me.

Well this past three days was VidCon. I was fortunate enough to be able to go for a couple of days. Though I did not meet the duo themselves, I did see them a couple of times on stage. It was truly amazing to go and be apart of it. Some of it wasn't to organized, like signings, but all in all it was great. If any of you have the chance to go next year, do it. As for MythiCon, I am still deciding on that. This is my first full year as a mythical beast and of course would like to meet Rhett…

My Near-Death Experience- A True Story by Marcus Bean

This morning, I woke up and went back to sleep. Or tried to. When I realized I wasn't going to be able to, I stretched my arms out, and both of my hands went under my pillow. Suddenly, something grasped my left  hand.

I struggled to move, I tossed and turned, not screaming or saying anything at all. That wouldn't have helped, I was alone.  My heart was racing, there was an intruder and they were going to murder me. I devised an incredibly stupid yet simple plan in my head, I…

Hello, fellow mythical beasts. I run a youtube show called the Answers Talk Show. If you could look it up, that'd be great. If you like those videos, subscribe to my page. Thank you.

1. R&L are both exceptionally atractive

2. They make you laugh by doing amazingly mythical things

3. Its not just a show that they do once a week. They post every day!

4. They are commited to their fans

5. They take the time to deliver an epically mythical show

7. They are somewhat unpredictable

8. They could make you your own commercial

9. They give you grooming tips for shaving and how to make your hair stand…

Now, there are a lot of mythical beasts in Alberta and I am one of them. It would be all of our dreams to meet the two. I think that Rhett and Link should find them selves a spot in either the Edmonton expo (which is in September) or the Calgary expo (which is in April).  This would be good for all of us in Alberta and I think it would also be fun. I have been to Edmonton expo and gotten Gregg Berger's autograph (he plays Odie in Garfield and Eeyore in Winnie the Pooh) and  I would love to…

Does anyone else remember that time when Rhett and Link got into a slapping fight? I have watched it at least 50 times and it still makes me laugh.

Hello! I'm new here, but I have been watching GMM for a while now. I thought I should make a gif of a couple of things. First, lets talk about Links pool pants dance. xD

Kids take it from an older lady, If someone can't take you at your worst, takes more love than they put forth and couldn't be romantic if someone filled them with sunshine and shot a cupid up their tush, then you may re-think a relationship with them. *slings web and exits right*

Our Newest Family Member Link :-) Cause Its So Darn Cute After people say brb people say wb for what they think means welcome back, but it actually stands for water buffalo as I and some chatters have agreed

So as none of you know I play the harmonica. As some of you know I play the recorder. I also play guitar, keyboard, drums, xylophone, and next year I  am trying out for trumpet. Now people will either say instruments are super hard to figure out how to play. Me on the other hand says experiment and you will get it. So all of you out there who want to play an instrument of some sort, go for it! Just warning though, lots of instruments are a lot of money. Also, while we are on the topic of… The minute I saw this I thought of Hee Haw. It was a given when I stayed with my papaw that we watched it. He usually had a guitar playing along. This is a tribute I guess.

This speaks for its self really. As a kiddo in the 80's, the album cover would make or break if I would be allowed to buy it. I think my dad would have let me get this one. Shoot, as a grown woman, I would buy this now. :-) 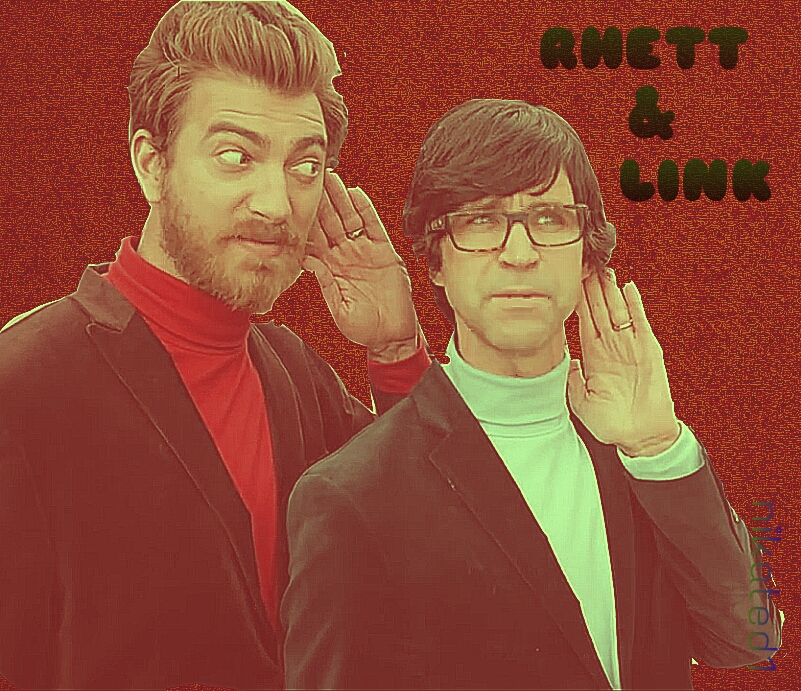 Rhett and Link inspire me. I remember my dad listening to his albums and I would sit in the floor and go through the album covers. When I see R&L's music videos, they give me ideas for art, music, etc. Here is a Rhett and Link 60's inspired album cover. I have so many more going through my head. Hope everyone…

Campaign to Send off the Mythical Mail Boulder Miley-Cyrus Style

IT IS TIME TO RALLY

I have a suggestion for the ending of the Mythical Mail Boulder.

Recreate the "Wrecking Ball" music video using the Boulder as the wrecking ball and throughout the video when Miley is destroying the building around her y'all should be destroying the Mythical Mail Boulder. And every time you come across something that once might have been edible, you lick it. You could also rewrite the lyrics to "Wrecking Ball" either listing…
Continue

How I Became a Mythical Beast

I recently discovered Rhett and Link through GMM. I watched one video and thought, "Hey, this is pretty rad," and then proceeded to watch another episode. And then another. I'm now working my way from the beginning of GMM onward, with the occasional video featuring their equally awesome, non-GMM endeavors.

Wanted to go swimming today with a friend. #rain

Hello , this is my first day as a member. Wish me luck!