This blog is pointless,  but these are some things in the chat room that you might see me say, so I might as well tell you what I am talking about so I don't have to answer you everytime you stupidly ask what the heck I am talking about:

I'm not the one who came up with this, but I still use it all the time ( I think it was actually Kim, if you know who she is.)  Instead of saying "link" for a link for such as a youtube video, I say Rhett. Why do I do this? Because switching things up is fun.

I also didn't come up with this. This term used to be said all the time when I first joined the great Komm. This is short for "welcome back" for when, you know, you're welcoming someone back after they returned from saying "brb".

THIS I came up with... or at least I think I'm the first one to on here. Instead of saying "back" after I return after saying "brb" I say front. Why? Same reason I say Rhett instead of link.

I don't really use this one as often anymore because if I say it everyone won't know what i'm saying and think i'm some weirdo (Which I am anyway.) I decided that "brb" is too boring. So is "be right back." So yeah, Big Red Bottom simply means "brb".

This is just a word I made up that just means breakfast. Don't ask why, just go with it.

You are going to think I typo-ed "fro" and that I really meant "for" but I don't. I purposely say fro. Why? Same reason I say bretchfats.  I'll usually say "And yes I meant to say fro" after I say this for the sake of keeping away the grammar Nazis. But whatever.

Not exactly what I said but what Sir Jeff Flame {royal fire pony} said in the chat room. It's a long story, so just go with it. Kayliauna (NinjaKitty) posted that convo on Instagram too XD.

In ze chat I said I forgot what I was going to say, and Table Foster (Therizinorapter) said "Did you walk through a doorway? That makes you forget things." and I said "YES I KNEW THAT DOOTWAYS MAKE YOU FORGET THINGS" soooooo yeah...... XD

Pretty sure this explains it : 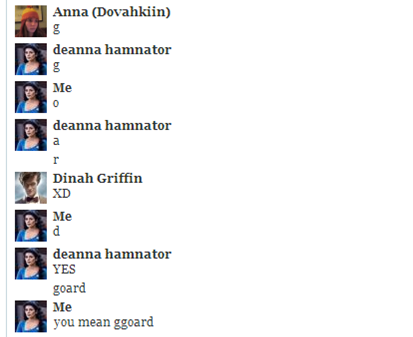 The correct version of what 11 years old is. "eleventeen"

I am pretty certain that there are way more bizarre things you will see me say in the chat room, but I am too lazy to think of the rest.

I will add onto this whenever I remember something else that I say or come up with something new.

Thank you for reading this pointless blog of mine.

What about the amazing "komma"?

And I believe your Jack and Dean obsession should be included like, "fac-e-book".