I Got Rhett's Drill!

I’m still not exactly sure what happened, but all I know is I’ve got Rhett’s Mythical Corn-Eating Drill…and I didn’t pay hundreds of dollars for it! In case anyone was wondering, here's how this all came about:

When they announced the auction last month, I hopped over to eBay and threw in a couple of early bids, and like many of you, sat and watched as the bids climbed higher, and got pretty discouraged – I mean, it was great for the charity, but who could really afford that? So I gave up and moved on with my life.  Then, just a few days ago, I got an email about a Second Chance offer to buy the drill for the amount of my last bid.  My first thought was that it was a scam.  So I logged on to my eBay account to check it out and the same offer was there.  So then my second thought was that maybe the guys had signed a bunch of drills and everyone who placed a bid was getting the same offer – that’s cool, again, it’s all for a good cause, right?  So, since it looked legit, and I was VERY curious to see what I would actually receive (and I needed a drill anyway because my old cordless drill had died – it wouldn’t even charge anymore), I went ahead and “Bought it Now” – for a relatively reasonable price – still glad it’s all going to charity.  (My best guess is that all of those higher bids were bogus, if you all hadn’t already come to that conclusion.  That’s kind of sad.)

So, just last night, a FedEx package showed up on my doorstep, and here’s the scoop:

1)      As far as I can tell, it is THE drill they put up for auction – The autographs and other writing and even the scratches on the bottom exactly match the photos on the eBay auction page (for all you die-hard GMM fans out there, it is actually the drill Link used in GMM #705 “Corn on the Drill Contest” episode, not Rhett’s – his was a different model, but it’s the drill Rhett kicked off the auction for).

3)      It doesn’t smell like corn or butter or anything else that they put on it in that GMM – I was wondering if it might have some mythical residue on it, but I’m kind of glad it doesn’t.  Someone cleaned it up nicely.

4)      There were no taco shells – also glad, since I didn’t really need them.  I would have had to have a “Will it Taco” party with all my friends and family, or would have just donated them to my church’s food bank.

5)      The funny thing is, I guess after R & L signed it, it got shipped up to eBay in San Francisco, where the lovely folks there took care of the charity auction, and then they shipped it right back down to Southern California where I live, so it came full circle!

Thank you, Rhett and Link!  And congratulations on 800 GMMs!  I am thrilled and honored to own a piece of mythical history and will treat it with care and respect.  Now, I wonder what happened to Link’s phone…

So cool, and thanks for all of the extra tidbits of info too. I was wondering if it had stuff on it. The first thing I would have done was check the creases for residue or smell it..hahaha. Kind of gross, but I would have done it.

K-Mod Comment by Victoria (Centauromadoose) on November 13, 2015 at 9:59am
Wow, fantastic! Congratulations on getting the drill!! :D

Thanks for filling us in with all the details, too. I was curious how the auctions turned out, in the end.

Yeah the bids had a lot of fake ones. In the end it was switched to approved bidders so you couldn't bid unless you emailed first to have your account approved to be able to bid on that item. It's a pre approval for the new ones too.

So huge congrats on getting a second chance :) 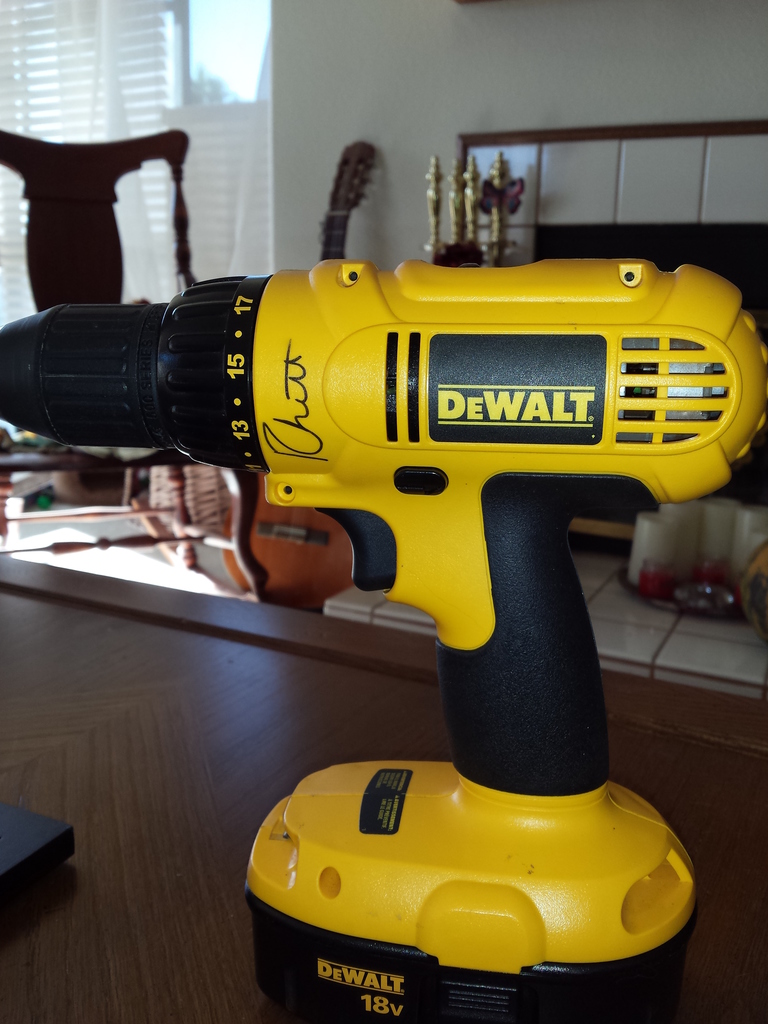 Here's a pic of the mythical drill in its new home!  :)