Kommunity Outage: Our Apologies, Thanks, and Welkomm Back

As you likely noticed, the Kommunity website was inaccessible to nearly all our members over the weekend, starting on Friday and ending today. The site went down sometime around 5:00 p.m. EST on Friday and began displaying a "redirect loop" error message from all browsers, including Internet Explorer, Mozilla Firefox, Google Chrome, and Apple Safari.

Your K-Mods immediately began attempting to reach out to R&L to bring attention to the issue. Since the K-Mods normally contact Rhett and Link via the Kommunity, we were only able to reach out to them through Facebook and Twitter following the site outage.  One of us was also able to contact Ning -- the host of this website -- and report the issue. Ning came back and told us there was an issue with the domain's DNS settings not pointing correctly to the Ning Network, resulting in the redirect loop error. We were told that this could only be addressed by the site owner (Rhett and Link).

Connection to the Kommunity was restored just shortly after 3:00 p.m. EST on Monday. We have not heard what caused it or how exactly it was addressed.

Though it was beyond our control, we're sorry for the inconvenience created over the weekend, and we also want to thank you for your patience and for reaching out to report this issue on Facebook and Twitter, if you did so. Welkomm back! We're happy to be back online once again.

Forgive my lateness, but it occurs to me that in the interest of transparency and some closure, it might be useful to post the official response we received from Jen, R&L's social media crew member, regarding the Kommunity outage back in December.

This was sent to the K-Mods following the outage and was in response to a message I wrote that expressed disappointment in the lack of communication during this incident. (I have redacted some personal contact information that Jen provided us.) 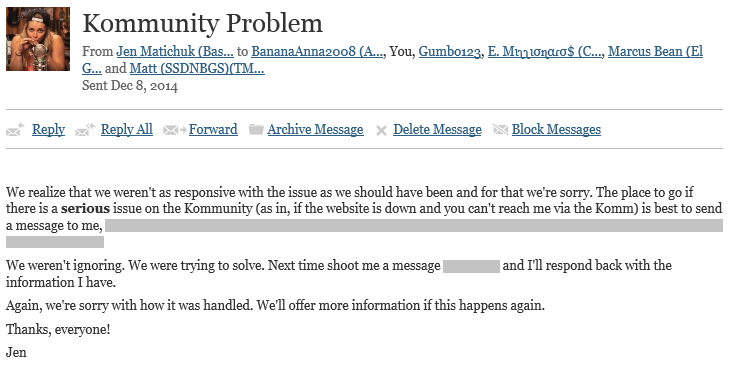 Thank you for explaining this and thank you for fixing it! :) I suspected there had been something like this as the error mentioned about a loop error. For future situations, I wonder if the Rhett and Link facebook page could be used in this kind of situations to let the kommunity know that the fixing is under work?

Did some digging and I found a newly purchased domain with the same godaddy page.... www.theheyheyshow.com is a link on the youtube channel's g+ page. So, yeah, that PROBABLY has something to do with it.

An update on the "fe-mell Good Mythical Morning" and some more information on the Kommunity outage? What an intriguing new featured blog feed to come back to after days of Komm-lessness.

Comment by Hannah Joy on December 8, 2014 at 4:54pm
K-Mods, thanks for the helpful explanation and for the role you played in getting it fixed. I was confused over the weekend as to why the site wasn't working. I'm glad it's fixed now. :)

I kept getting the REDIRECT LOOP too every time I tried to log on for the past 2 1/2 days . . . figured it would get repaired sooner or later, but never really got worried until just about an hour before the Komm was back up and running and I received this response instead . . .