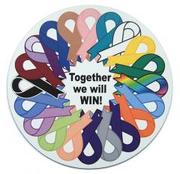 If you have or don't have cancer and you are a supporter of those battling it, join Cancer Supporters.

Hi! If you would like, tell us your relationship, history, experience with cancer. I know we all could use extra support sometimes. Share what you're comfortable with telling. My story: My dad passed…Continue

I put together a mass list of the various cancer ribbon colors for you all for reference. I put it together from a number of sources, listed below. Some cancers are known for only one color, some are…Continue

You need to be a member of Fight Against Cancer - Supporters to add comments!

Congratulations, Melanie! Thanks for updating us and I'm so glad to hear the good news! You have certainly been blessed!

My mom has officially been released from her doctor to go back to work! She still has some "mild cognitive impairment," her focus and concentration needs work every day, but she is very happy and excited to go back! We are working on the paperwork process now. When she goes back, it will be steady and she'll have to take her time getting used to everything again, but she has a lot of support to get her through.

Happy Holidays everyone, and I also hope everyone's 2018 is smooth and happy! :)

Hi, all.  It's been a while, so since it is Christmas, I thought I'd check in and wish you all a very Merry Christmas and give you an update.  I posted the following on instagram on December 1:  "I can’t believe it has been a year!  Today is my “chemo-versary” (a friend made that term up, not me). Many of you didn’t even know I was dealing with this, since I didn’t put much about it on social media when I was going through it.  I had a lot to process and wasn’t quite sure how much I wanted to share at the time. I was diagnosed Nov. 4, 2016, and on Dec. 1, I began chemo treatments for stage 2 breast cancer. The photo is me this past Monday, Nov. 27, after my last infusion.  Over the last year, I had 6 heavy-duty chemo treatments, then went every 3 weeks after that for a Herceptin infusion at the chemo center for an entire year.  After the initial chemo, I had surgery and then 34 radiation treatments.  My hair looks a bit different, but that’s okay…I have become a stronger person.  I saw God’s hand throughout the entire process, and just knowing that He was in control and having the support and prayers of family and friends helped me get through every day of this past year. Monday, I got to ring the bell and received a "graduation certificate" signed by all the amazing staff at the infusion center. They also had a poster (photo below).  Definitely something to celebrate. Thank you, Lord!"  In addition to finishing my infusions, last week, I just received the report from the doctor showing NED status, or "No evidence of disease."  That's what I've been waiting to hear.  Prayers for all of you in your and your family members' journeys.  2018 will be a much better year! 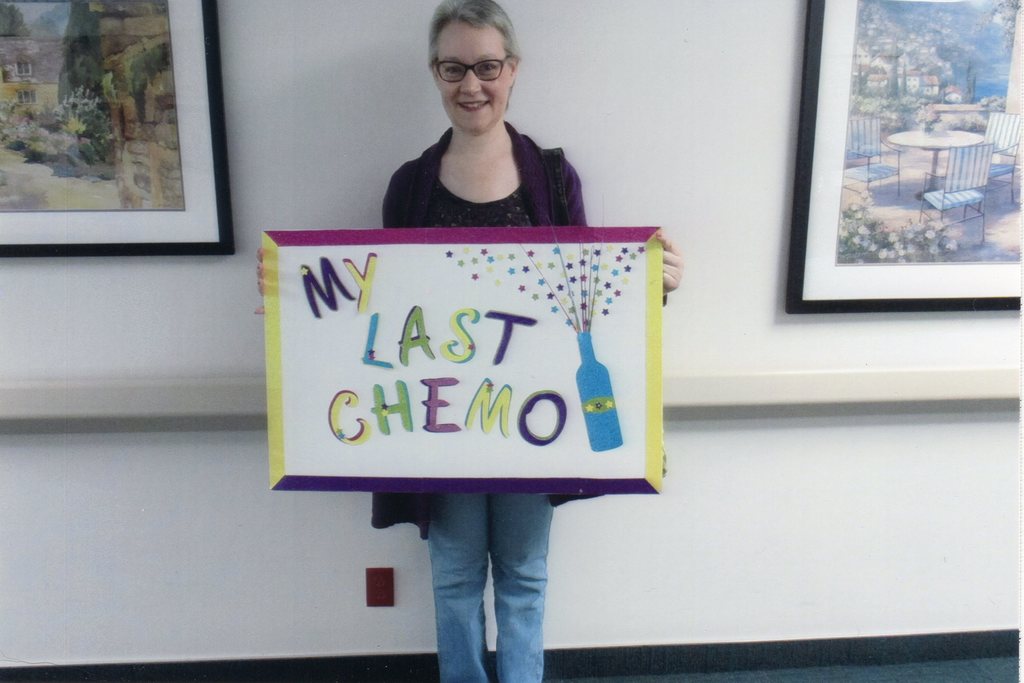 All the thoughts and prayers to you ladies that your health stays on the positive!

Back in 2000, I miscarried a child and after several follow up tests there were precancerous cells found on my cervix.  Normally this can be cleared up by a simple procedure in the office known as cryosurgery where the cervix is frozen and all dead cells fluff off.  Usually it never returns, but if it does, and you have to have to cryosurgery done more and more, it thins the cervix and makes it more difficult to carry children.

By 2005 it had not returned and I had my first healthy pregnancy and my older son. Then the bad tests returned.  I was told that if I wanted another child I had better do it.

HPV is what I was diagnosed with and the dysplasia never made it past step 1.

1 in 3 have HPV and I have the strain that causes cervical cancer.  I had my younger son in 2011 and in 2014, after the dysplasia returned I had a partial hysterectomy.  The only thing they left were my ovaries to keep me out of menopause. But, now we have to keep an eye on those suckers.

I never had to have chemo or anything like that. I have had more ladies than I can count, in my life, that have been diagnosed and treated with breast cancer. The most recent, a Mythical Beast named Jessie. Having a double mastectomy and fighting and sharing her raw experience and emotions on twitter. She is amazing. Cancer sucks!

Hi!  In a nutshell, my life has been touched by cancer quite a lot.  My mother has had a double mastectomy, and she is a breast cancer survivor.

As for myself, I have an inoperable tumour on my thalamus in my brain, and it is not currently growing, so that likely means it is not cancer, but the constant MRIs and followups are due to the fact that they treat any tumour in the brain as seriously as cancer as the growth and effect on the body can be unpredictable.  Through having my tumour, I have met many people in the cancer community.  My family and I raise funds for cancer research, and we do races to raise money for cancer.  I hope everyone who has been told they have cancer knows that they are a hero , no matter what path they choose to take after the diagnosis.

Love to you all!

A warm welcome to the new members that have joined in the past month! Thanks for your support and I hope you're doing well in your personal journey! Keep it up and stay strong!

I understand that completely, and not to mention everything to do with insurance! That sounds lovely. Indeed! Always thankful.

Thanks!  I am amazed at how many doctor's appointments, labs, scans, etc. I've had, and I'm also amazed that I've been able to keep them all straight. I got to go to church for the first time in months with Mom & Dad for Mother's Day, and then had a nice, quiet, home-cooked dinner with them later. Counting all my blessings!

Hi, Melanie! Good to hear from you. Mom's had many doctor's appointments just to keep her in check, but she's doing well. Thanks for asking! And we did. We were with some of her family and had a nice dinner together. Hope you did, if you celebrated.

I'm so glad the surgery went well. I hope they got it all out as well. That's great to hear. They sure do help keep us going in many ways. :) You're in my thoughts for the radiation.

Hi, guys!  Just checking in. Heather, how is your mom doing?  I hope you had a wonderful Mother's Day. My surgery in April went smoothly. They did find cancer in what they took out, but my surgeons are confident they got it all.  I'm still off work and about to start radiation treatments soon.  Overall, I'm doing great and have kept in good spirits, which is easy when I can laugh at R&L every day and have wonderful family and friends supporting me.