As I see it, the PURPOSE of the two GW projects was most likely three-fold:

1.  To exercise the mind, express mythical creativity and HAVE SOME FUN!

Although I’m certain that there was a lot of hours and hard work involved, I’m equally certain that, in the end, all involved would say it was a blast to be a part of something so awesome.

2.  To encourage and internetain your friends and fellow mythical beasts.

I highly doubt that anyone who has heard of and/or seen either of the finished projects would say otherwise.

3.  To engage and enlighten others, educate all of mankind about Rhett & Link and, as a byproduct, expand the RhettandlinKommunity thru the induction of new members worldwide.

Hmmmmm . . . if anyone questions whether or not you were successful in achieving the goal stated in Step 3 above, I am here to report with indisputible numerical evidence:

As a member of  The (Unofficial) Welcome Kommittee, I have personally made a commitment to post a WELKOMM note on the profile page of each and every new member of the kommunity for almost 2 ½ years.  And, being the “numbers geek” that I am, records of that activity are kept. I know the name and MB Number of the very first member welcomed after the Welcome Kommittee was established in September 2010.  Then using a bit of math it is easy to show that over 21,000 new members have been welcomed over that 869-day timeframe.  Using the “exact” numbers, it has historically averaged out to 24.6 new members per day, even including the high volume of peak periods such as school breaks, Christmas vacation and two SuperNote competitions.

Rhett and Link’s announcement of the upcoming dual premiere and simultaneous kommchat event was published on YouTube at approximately 6:00AM Kavetime on Thursday, January 30, 2013 (GMM Episode #228 - - Peanut Butter VS Nutella). In the four days (96 hours) following that notice, with the dual premiere occurring about mid-way thru the period, a total of 712 NEW MEMBERS have joined the kommunity.

Permalink Reply by Lysh Fish on February 4, 2013 at 3:54pm
Dang, that is a whole lotta new beasts! That's awesome!

...your Kommunity record keeping is really intense, Gumbo. More than I even previously thought.

That's awesome! I was wondering how the announcement impacted new memberships, so thanks for the breakdown!

Contest link is now in the description, too.  GO, Beasts!

A special message from The (Unofficial) Welcome Kommittee:

We are all aware that the past week has had extremely high volume - - - over 700 new members in a 4-day period (see note here).  Special recognition is due to Nastya K (Anansikitty) for welkomming above and beyond the call of duty! 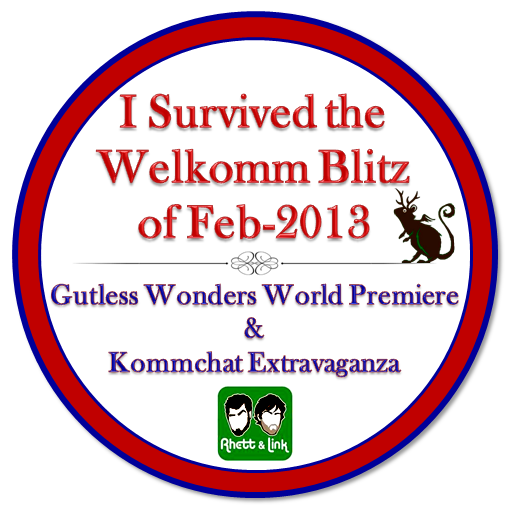 And hey, look -- you're kind of a big deal -- both movies now have a page on fanfilms.net:

Even our "production company" has a page!

Permalink Reply by Meg the Emperor Murmurcorn on February 9, 2013 at 4:18pm

Um, just wondering, are people involved in the musical allowed to enter? I don't know most of the cameos, except the one I made.

Yes, but any you made don't count toward your total.