SO, as you may have heard, we are nominated for a Webby!! Very exciting!! We have some pretty big competition (What Does the Fox Say + others) but we are currently in 2nd place! We just need YOUR help to push us into the first place position.

How can you help, you say? WELL, that's a great question. It's pretty easy! All you have to do is go here and click on our Breaking Bad: The Middle School Musical video to cast your vote!

Once you've done that, spread the word! Tell everyone you know to vote! Hover over their shoulders until you physically see them click vote! Tell people you'll mow their lawn if they vote! Whatever you need to do... We will appreciate ALL of it :)

Once again, just click HERE to vote and help us win this Webby!

I VOTED! GOOD LUCK GUYS, WE ARE WINNING!

Don't get me wrong on this, because I am glad that Rhett and Link and the entire R&L crew and staff are being recognized for their work by the "industry" critics and judges’ panel via the two "honoree" mentions received this year.  But I just don't get exactly how the People's Voice voting is anything more than a popularity contest or to see who can be most effective in mobilizing their fan base.

- - - if every category received the same "average" amount of attention from the "PEOPLE", that would mean only 1,374 votes cast per category (does nobody care?)

- - - here are the "most popular" categories so far . . . I assume that each of these most likely have received higher than average voting, meaning that some of the "less popular" categories might end up in a 5-way tie for first place (one vote for each nominee. . .as cast by that nominee):

- - - now honestly, did ANYBODY really bother to vote in the Web/General Website/Self-Promotion/Portfolio category?

- - - does Ocean City, Maryland "Instagram Hotspots" really stand a chance against the competition in the Social/Social Content and Marketing/City & Urban Innovation category?

Now then, all that said, R&L still hold a commanding lead in their category for the People's Voice award with less than two days left to go. 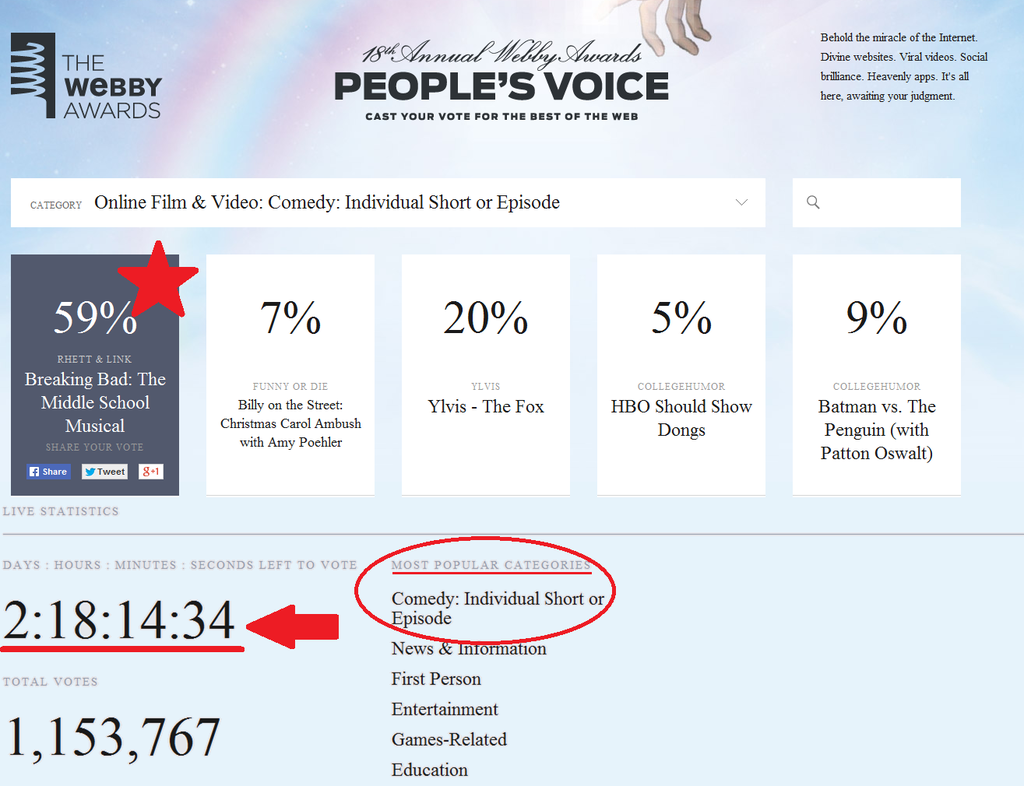 i give up...i dont care who wins thats not the point but whatever you guys live in your little world not my problem...

@ Zero (Parkour Prodigy) ~ this message brought to you by the Ylvis Fan Club of McGrady, NC

winning by cheating isnt winning at all so for all you people who voted multiple times i hope you feel good about yourself...