a.k.a. How things Work in Real Life 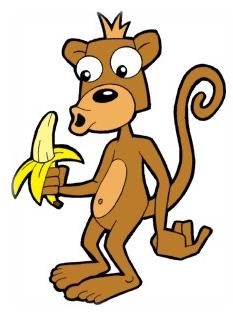 Start with a cage containing five monkeys. Inside the cage, hang a banana on a string and place a set of stairs under it. Before long, a monkey will go to the stairs and start to climb towards the banana. As soon as he touches the stairs, spray all of the other monkeys with cold water.

After a while, another monkey makes an attempt with the same result - - all the other monkeys are sprayed with cold water. Pretty soon, when any monkey tries to climb the stairs, the other monkeys will try to prevent it. Soon no monkeys try to climb after the banana.

Now, put away the cold water. Remove one monkey from the cage and replace it with a new one. The new monkey sees the banana and wants to climb the stairs. To his surprise and horror, all of the other monkeys attack him. After another attempt and attack he knows that, if he tries to climb the stairs, he will be assaulted.

Next remove another of the original five monkeys and replace it with a new one. The newcomer goes to the stairs and is attacked. The previous newcomer takes part in the punishment with enthusiasm! Likewise, replace a third original monkey with a new one, then a fourth, then the fifth. Every time the newest monkey takes to the stairs, he is attacked. Most of the monkeys that are beating him have no idea why they were not permitted to climb the stairs or why they are participating in the beating of the newest monkey.

After replacing all the original monkeys, none of the remaining monkeys have ever been sprayed with cold water. Nevertheless, no monkey ever again approaches the stairs to try for the banana. Why not? Because as far as they know that's the way it's always been done around here.

And that, my friends, is how a company policy begins.

Based on an actual, real life experiment on mob mentality behavior

Comment by ✞JeanWifeMoMhorphin✞ on January 18, 2011 at 3:56pm
WOW!! It was 44 years ago that it was done. I know this because it was done the year this money was born.

I find it funny that this whole thing was inspired by mom telling me that there was a monkey in her closet. Oh dear.

This is really good though.

Wow. That's absolutely amazing, and true. So many misunderstandings, and prejudices, because of what happened to one person or a group.