Now all Mythical Beasts can play Jeopardy!: The Rhett & Link edition that was sent to Rhett & Link by Rachel (nezulupantro).  Click here to watch it in the Thursday Means Mail episode. 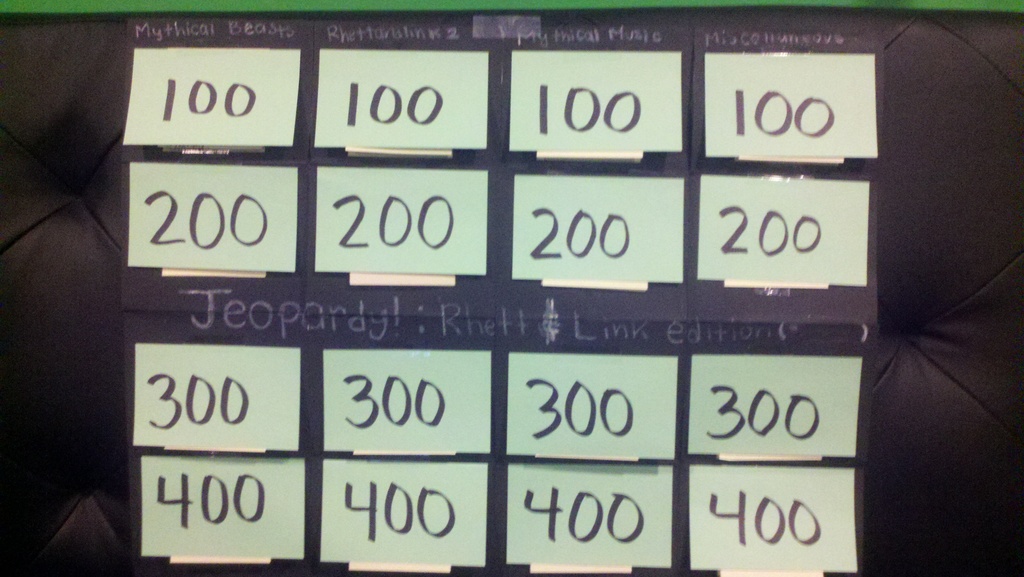 What is Squiddon? (giant octopus on fire)

What is Good Morning Chia Lincoln?

In a GMM episode, Link shared his story of the time he lost his iPhone on this rollercoaster . . .

What is Sea World's Manta Ray?

On GMM, he shared a story of getting a massage in which an old woman stood on his back . . .

Who is Rhett McLaughlin?

This was done with Chia Lincoln after the final episode . .

What is he was given to a fan?

I tie knots the eagle scouts haven't even heard of like the double over-hand figure-eight fisherman's bird glove . . .

What is Epic Rap Battle of Manliness?

I would need no broom to sweep this room if someone spilled Honey Bunches of Oats . . .

What is My Hair Song?

You gotta try it before you knock it, try to name another sport to top it, when you can win with an open cold one in your back pocket.

What is The Cornhole Song?

Who is Lionel Richie?

He drives a black Scion KB . .

Rhett planted this type of "bush" (actually a tree) on the side of his parent's house. . .

What is a cedar tree?

Link suffered these 2 major injuries in a snow boarding accident when he was younger. . .

What are a concussion and a broken pelvis?

Only 2100. But I honestly don't try to memorize everything about internet personalities. You just remember what you remember, you know?

I got most of them right!

I got 2800 points ^__^ My worst category was Mythical Beast names.. Did anyone else sing the lines of the songs as you read them? ;)

3800! I only couldn't remember Locke's mythical beast name, even though I watched that blog not too long ago. Fun game!

what country are you from, mythicalol chick??

here...let wiki tell you what it is :) and you can still play even if you have never watched jeopardy before!