SPARKS — Much of Nikk Audenried’s high school career has been spent looking upward. Neck tilted, eyes sharply focused on any one of the hand-constructed machines he enjoys sending high overhead.

The 18-year-old Spanish Springs High School student began experimenting with radio-controlled planes and helicopters in the seventh grade. In the passing years he has built, programmed and flown several of those flying machines, forming a hobby that combines hefty air time with meticulous programming hours. 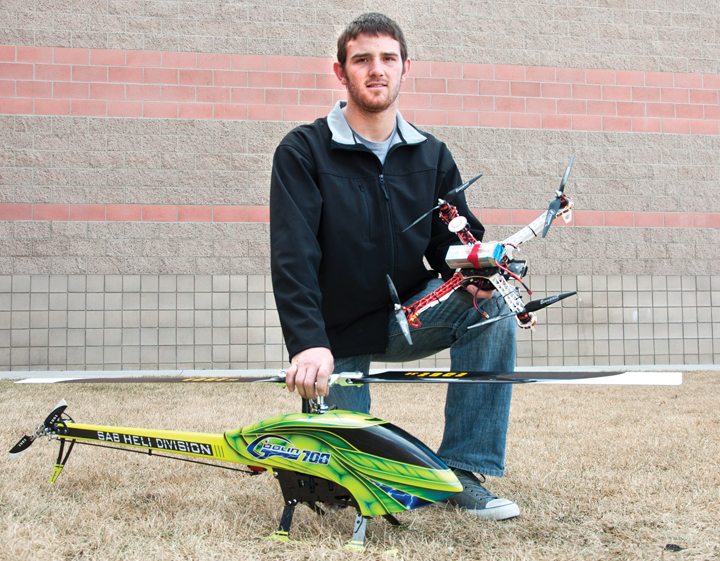 “My dad had some planes hanging up in the garage and I started bugging him to take the planes out, so finally he took me out to fly them ... and basically everything took off from there,” Audenried said. “It comes in a kit so the frame sides are all there, but the hard part is when you have to build the electronic codes. The control unit in the back all has to be programmed and that’s the tough part. Anyone can really build one of these things, but making them fly right is the hard part.”

Audenried joined the Reno Radio Control Club a few years ago where he is able to fly with, and in some cases against, other radio-control enthusiasts. Drag races and “fun flys” continue to feed Audenried’s passion for flying---and the desire to see some good crashes.

“I just go out to try a new trick, have fun and do whatever,” he said. “I just love doing it. It’s fun. I have always been into this stuff. I have crashed (his newest helicopter) once, and everybody crashes. It is just part of the hobby. A crash on this thing though costs about a thousand dollars.”


As Audenried wraps up his final semester at Spanish Springs he uses his time in Honors Physics as a way to better understand his helicopters and planes. He said class is made even more enjoyable when he can find a physical application to the hours spent in class.

“It is pretty fun to put it into real-world situations,” he said. “Most of the kids I talk to can set the equation but they don’t really know what it is for. I try to learn how to apply them and this has helped a ton.
“Now that I am in physics and starting to more pinpoint engineering, it makes it easier. It is not a broad spectrum like math. I can really start to figure out what I want to do.”

Audenried is also a member of the football, wrestling and baseball teams at Spanish Springs and he is an active participant in the Robotics Club. The mechanically savvy teen said his plans are already set to attend the University of Nevada, Reno, where he will enter the engineering program. His focus, however, is still a toss up between mechanical and aeronautical engineering.

“I am probably going to get my private and commercial pilot’s license,” he said. “I have been talking to some people who fly commercially, and one of them flies for a drone company in Reno, and because he has his commercial pilot's license, he is going to be the trainer for this company’s new pilots. They will be looking for new people who are engineers to design so I could get into the drone field.”

Audenried said he would like to fly the RC helicopters commercially but wouldn’t mind hopping in a full-size chopper for a piloting profession.

Spare time is usually an active time for Audenried, who often rides motorcycles or assists his brother in building or repairing anything motorized. He said the couch is not the preferred place to spend down time.

“I am always building something,” he said. “Me and my brother build bumpers for trucks or help people fix their cars and stuff like that. I am always working on things. My dad has taught us pretty much everything we know. The helicopter stuff I kind of took interest in and I learned everything from him. I don’t like just sitting around watching TV. It’s too boring.”