Star (Siamlioncal) has not received any gifts yet

A Little About Me:

I am a self-taught artist and I have been dancing ever since I was two or three years old.

I have been a Mythical beast for about four years, I wish I could remember the day I discovered them. All I can recall is that the first episode of GMM I have seen is Learn to Speak Cat, and I have been a loyal viewer ever since.

I watch GMM and LTAT every morning it's released (or at least try to watch in the morning, sometimes afternoon) with my family.

I went to the Tour of Mythicality show in Minneapolis on December 8th with my mother and oldest sister. We had VIP tickets! Meeting and getting a picture with them is awesome.

Be your mythical best!

First, I like your Siamlioncal avatar!  Dig your style, hope to see more from you! 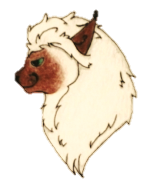