Book #2 - - - As You Wish: Inconceivable Tales from the Making of The Princess Bride ~ by Cary Elwes 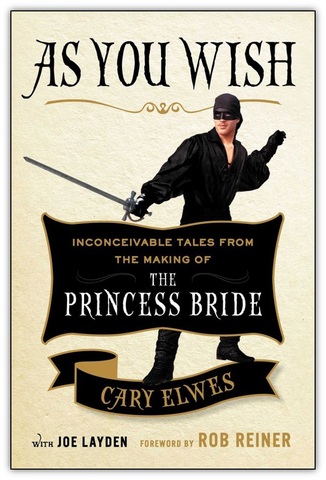 This book is fantastic!

I kind of lucked out, since I already had it in my Audible library.   I'm sure it makes a great read in print-format too, but Cary Elwes' voice (along with the various 'cameo' voiceovers all throughout) makes it just perfect.

I first watched the Princess Bride around 1988 or 89 at a sleepover with my childhood best friend.  We both loved the movie instantly, but were just young enough (7 or 8) that I don't think either of us quite realized the movie was a comedy!   It was a grand adventure and a beautiful fairytale...  And we took it very, very seriously.   I'm not sure when the glorious humor of it finally registered too, but in any case, it's remained an all-time favorite ever since.

I really enjoyed getting this kind of first-hand account of the movie: not just lists of trivia an anecdotes, but Elwes' personal experience and memories.   A lot of the stories were entirely new, but even the ones I'd heard before had a new perspective here.    Highlights for me: the long and complicated epic of making that sword fight -- THE Sword Fight -- come to be; everything about the wonderful Andre the Giant; and the stories about the casting process, how this very perfect cast came together.  I was also more amused than I probably should have been by the incident with Count Rugen's sword.  I know, I know, concussions are very dangerous and that sounded terribly painful.  I laughed anyway.  Something's wrong with me.

The end of the book did make me a bit sad though.   We know once those VHS tapes made the rounds, (like the one at my 1988 sleepover), the movie would be recognized as the work of pure genius that it is; but hearing again how the pathetic studio execs didn't understand what they had, didn't know how to market the theatrical release, and so didn't really bother trying...  It mostly makes me want to march on down to LA and track down a relevant executive to slap.  This sort of thing seems to happen depressingly often whenever someone/something amazing is too far outside the box.   But hey, at least this film did eventually get it's fairytale ending  :P