So I noticed that the tweet from @rhettandlink and the video previewing this week on GMM have been taken down. Anyone know why or have any theories? Just curious.

There were a LOT of negative comments about this week's guest and they may pull the segment entirely. I guess they don't want another Padma situation...

Permalink Reply by Sarah H on March 11, 2018 at 4:17pm
I missed ALL of this- I didn’t know anything happened with Padma; she was kind of rude but I didn’t know people lashed out so bad. Surprised I missed it- I’m usually pretty on top of things on Twitter and stuff lol.

Why is this guest so polarizing? I know literally nothing about her.

After Rhett and Link took down all video and social media posts referring to Lia "SSSniperwolf" as a guest yesterday, it appears that she has been officially removed from this week's GMM guest roster. According to Interbridge, which provides lineups for talk shows, SSSniperwolf's episode was supposed to air today; instead, GMM aired the vegan fast food hacks episode, moving up their schedule by a day. https://www.interbridge.com/lineups.html 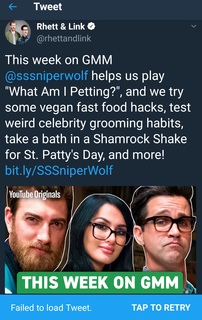 I don't know much personally about SSSniperwolf, but the overwhelming impression given by commenters is that she has a history of cyberbullying other people, among other things. I can only assume that in the wake of Rhett and Link requesting people to not bully their guests (following Padma Lakshmi's episode), they decided that having someone known for bullying on the show was a move they didn't want to make...which also suggests they didn't know about SSSniperwolf's reputation before it was pointed out to them in the comments and social media posts. However, Rhett and Link have not yet commented on it or addressed the situation, and it's unclear that they ever will.