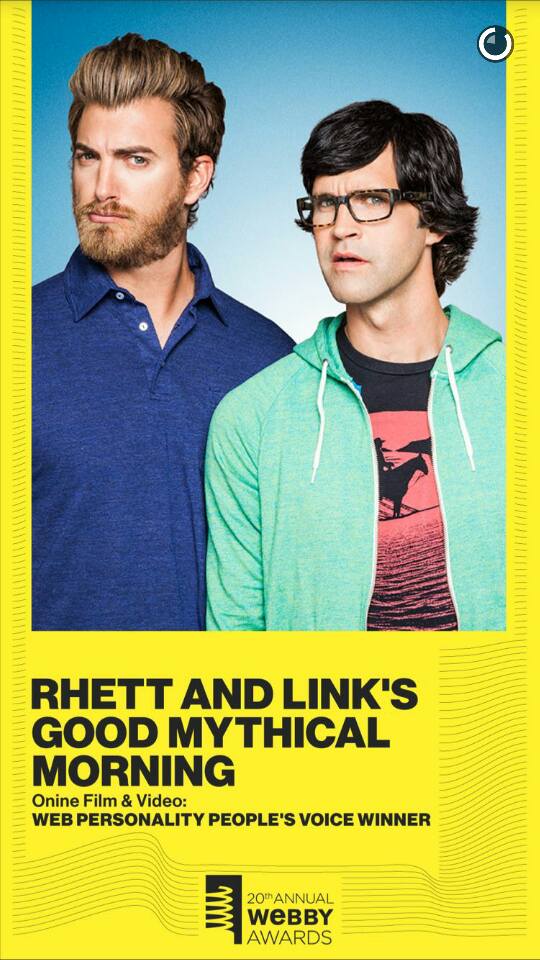 Permalink Reply by Debbie S (Pegawolf) on April 11, 2016 at 10:50pm
I have tried to vote everyday but for whatever reason I have not been able to since this past Friday. :(

Oh no! The only other thing I can think of right now is to try clearing your browser history/cache and see if that helps with the Webby Awards website allowing you to vote again.

Permalink Reply by Debbie S (Pegawolf) on April 12, 2016 at 1:23pm
Thanks for the suggestion! I was able to vote today without having to do anything. But I will keep your suggestion in mind in case I have the problem again :)

With over 40 percent of the vote now and like two days left, I guess the guys should start preparing something better than a 5 word speech!! Haha!

Here's a thread that has been going the last two years for suggestions:

UPDATE: The Webby Awards announced this evening via Snapchat that Rhett and Link won the People's Choice award for their category Online Film & Video - Web Personality. I've updated the discussion post with the information! Woohoo!

The Webby Awards show airs TOMORROW, May 17th! A clip of Rhett and Link on GMM is in the advertising trailer!

Oops, I missed a category in the original post!

Rhett and Link were also honorees in the following category: