Thank you, my mythical friend. Your contribution is most appreciated!

Totally! I keep feeling like I'm close to beating it and then I get distracted with all the side quests.  But I like that the storyline doesn't feel "constricted" and I can do whatever I want haha. And the mechanics feel more realistic. Like, if you're in the desert, you can find shade or water so you don't overheat.

But otherwise yeah, it's an incredible game. Definitely up there with Twilight Princess, which was the first Zelda game I beat.

Ahhh, I am so late wishing you a happy birthday, yikes. I hope you had an excellent one! (Birthday wishes count for a full week, right?)

I thought you, of all people, would be able to figure this one . . . especially given the day of posting!

I got two new jobs this month so I've been working a ton. But! Somehow I've had enough time to play Breath of the Wild for the first time! My friend is letting me borrow his switch and I've spent an embarrassing amount of time on it. It's amazing.

Happy Birthday!! *Not even gonna make an old joke*

Regardless of whose time zone you go by, it is still the 17th. Hope you had a fantastic day!

I mean, if this doesn't say violent and intimidating, I don't know what does. 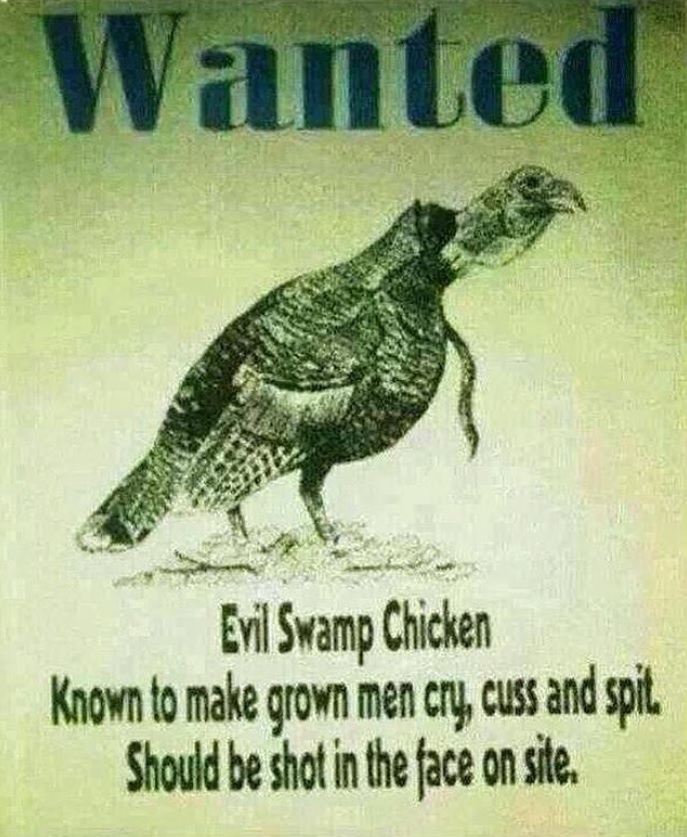 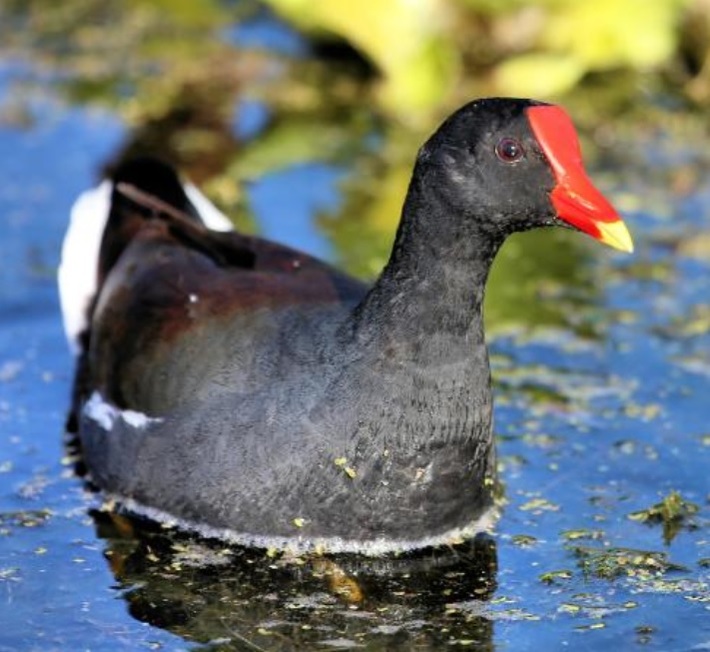 Lol, I actually couldn't though. I just like to pull out the Stockton card once in a while because it's totally not me. I'm a loyal Riponite these days.

Woah woah woah. I'll have you know that I'm actually ABOVE the country's average! Don't pick on the lowly (pun intended) and feeble! Besides. I would win a fight, I grew up in Stockton. *kinda tough*

-2?? I don't know how you do it. Even now it's 40 and I would say it's cold haha. I mean, I absolutely prefer colder weather, but my definition of "cold" is pretty pathetic comparatively. But I also can't handle anything over 80, so I have a very small range of comfort.

YES YES AND YES. I need to see the hobbit houses!! And Yellowstone. That's a must. And the Grand Canyon. Actually, just one huge road trip is a dream of mine.

Also, while I was in DC, I walked right into Virginia (before we got kicked out)! So that brings my grand total up to 4 states now. 46 more to go.

Right! I will say the terrain is pretty different than California's, there are irrigation circles everywhere lol. But it's so beautiful and I love flying.

Oh goodness yes, I'm an absolute wimp with the heat. And I can't imagine the humidity! We only have dry heat here and that's awful enough. I love the cold, but I'll admit I was absolutely freezing in Baltimore. It was only 3o on average, but it was definitely a different kind of cold. Although I did enjoy it, I was glad to leave right before it dipped below 20!

Here's my proof! While only a minuscule amount of time,  I can now add "Time zone traveler" to my resume!

Baltimore was good, but I definitely missed home. I spent one day in D.C. but everything was closed because of the government shutdown. :( However, I did meet the nicest group of Australians there so that made it better! Plus it snowed a lot! I will have my proof in January! The destination: Baltimore.

My school is sending me to the JMM again, what I did in San Diego earlier this year. Not only will I have an *official* out of state experience, but I will also be in a different time zone for the first time ever. For once, you will actually have a better time zone over me!

I would really like to visit a more conservative state for once because California annoys me, but I'll take what I can get!

I'll have you know that I'll be traveling to a whole new state soon.

ON THE OTHER SIDE OF THE COUNTRY. 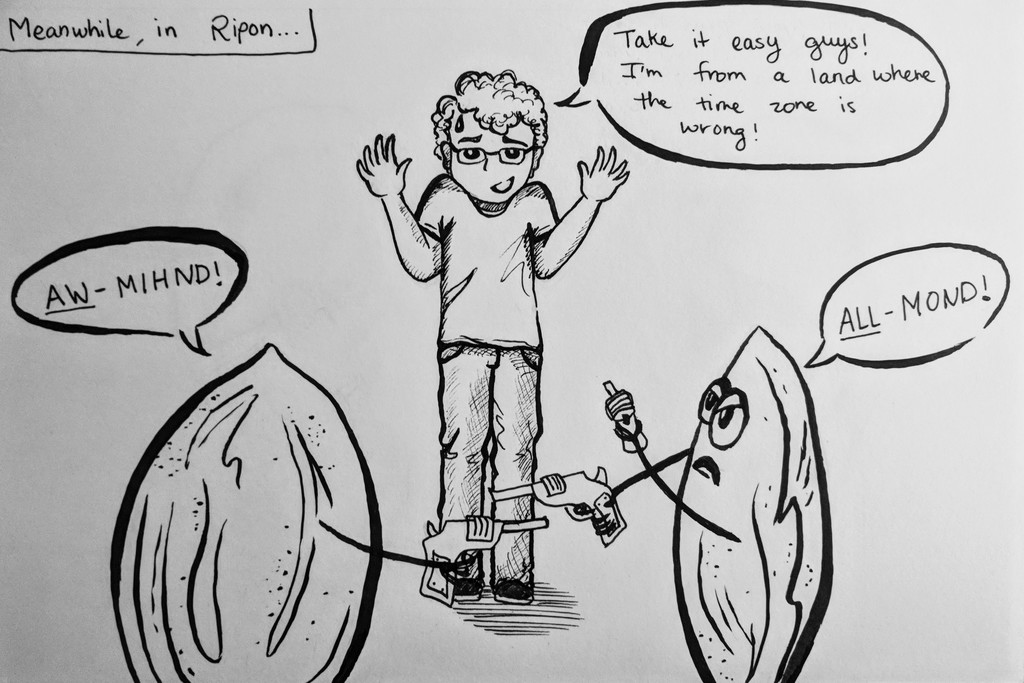 You are so lucky. Summer is terrible here, and it really doesn't even get as bad as it could. Upper 90's and 100's is the norm for mooonths -_- Summer is by far the biggest gripe I have with living in CA.

I have heard almond pronounced at least four different ways:

4. ^Any of the above choices without the "d" at the end

The A, L, and D are the letters up for debate. It's a complicated word here, apparently

Impressive! I don't know if I could handle weather that sporadic. I can't imagine it gets that hot though? My town is known for.....almonds. Not exciting, and only causes unnecessary debate for the "correct" pronunciation of almond. Modesto (10 minutes away) is known for some cool stuff though! Jeremy Renner went to my JC and George Lucas is from there. Macklemore even filmed a recent music video in downtown Modesto. But it's also like the second highest car theft capital of the entire U.S., so that's fun.

Perhaps I did deserve it because I was wearing sandals after everyone kept telling me to wear shoes...

Any of the northern states would be so amazing to see! It's so much wider. It's totally bizarre to me that there can be so much distance between towns or cities. I mean, put two Stocktons (where I was born!) together, and you already have a population size larger than Wyoming.

Maybe SD has bipolar weather like CA too? It's actually hilarious to see us wimpy Californians face the "cold".

As far as my foot, I was skateboarding. Down a flat, wide sidewalk. No one around. At about 2 mph. Call me talented to not only fall with no outside factors, but also manage to break three metatarsals. My doctor did: "Yes. Congratulations, Jessica. You actually managed a very unusual injury.  I've never seen someone do this from skateboarding." This is my second break from wheeled contraptions, so maybe I should just stay away from them. Needed surgery to correct my bones and I'm finally mostly healed. The scars at least look pretty gnarly, which is important. Haha But the whole story is far too long for this comment though, so I'll save it for later.