The Key Ring of Mythicality (KRoM) items in RED are viewer mail highlighted in the episode but

did not constitute a keychain added to the KRoM

"Table 1. Annual Estimates of the Resident Population for the

- - antique trolling lure for pike & lake trout at the getaway cabin on a private island near Sudbury, Ontario, Canada where the men never wear a shirt (from Heather Smith / New Hampshire, USA)

- - hillbilly keychain containing the ultimate power of 2 mythical beasts (from best friends Laurel & Nicole / in a ditch on the side of the road (not really) in Maryland, USA)

- - NO MAIL OPENED TODAY - - too busy with the celebration!

- - 36-year calendar keychain from India and part of her keychain collection (from Tanya Lynn Smith / ???)

- - actual keys from first car passed down from Grandfather that was "totaled" by a cow (from Jack & Jimmy Valentino / ??? )

- - 1-yr jarfull of artist pencil shavings in a Christmas Ornament (from Rachael Merriman / ???)

- -  assortment of favorite miniature items collected over the years, each one representing something from the GMM series (from college student / mythical beast / musician / artist & Kommunity member Praise Sharp (BanjopickinSiren) / Crawfordsville, IN)

- - shattered throat guard exploded by a slapshot at hockey practice (from Juliette Peterson & Mom & Sister [but not Dad] / ???)

NO MAIL SEGMENT - - too many Mythical Crewmember feet to get through

All good things must come to an end.

But, of course, the most mythical key ring of all time would have to be fitted to a key which opens that door to a most mythical adventure, now wouldn't it?

Can you spot your contribution somewhere on the completed KRoM?

You may ask yourself, "What happened to the mail before Season 10?" 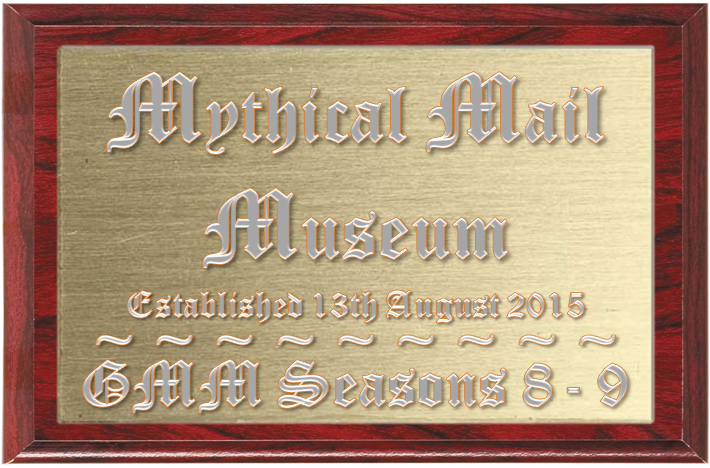 Hi guys :) Looks like the cattle ear tag was reposted for Episode 14.  I was so excited that they used the story of our island and fishing lure!  I have never posted here before, so hi!

Thanks for the reminder, Heather.  I was in the middle of updating the list yesterday when I got called away on other issues.  The entry above for GMMore #960 has been updated with details of your submission.

Welkomm to the Kommunity . . . and BEAST ON!

I know!  We are such a tiny state, too.  Thanks for the update!