Recently, I've noticed that a lot of Buzzfeed videos have very similar concepts to GMM episodes. The most obvious example would have to be the "Will It?" series and the "Can You _____ It?" series. The first ever "Will It?" episode was Will It Taco? - Taste Test which was released on May 5, 2014. I believe that the first "Can You _____ It?" was Can You Waffle It? which was released on July 10, 2014. Watch the Buzzfeed series (no doubt you've already seen the Will It series but you can still watch again!) and compare the two. I think that the "Can You _____ It?" series has stopped though (or at least there's been no new video from the series since 2015). Since its beginnings, both series have changed (especially "Can You ____ It").

An interesting example is this - on April 15th this year, Blind Chicken Nugget Taste Test was released. ON THAT SAME DAY, Buzzfeed released Fast Food Chicken Nugget Blind Taste Test was released. That's... odd. People are saying that one ripped off the other but I don't see how that's possible. GMM was just continuing what they were doing (fast food burgers, fries etc.(first was burgers on October 20, 2014)) and Buzzfeed was doing something that they were (probably) continuing too (I don't watch (AKA research) Buzzfeed but I think GMM did it first (but I don't know)).

Since I don't want to bore you people anymore, I'll just keep the last example short (watch the videos to compare properly) -

*I did watch the GMM episode, guys! I just wasn't signed in then and I was signed in when I watched the Buzzfeed video!

Can You ____ It? Series (in chronological order (I think)) for your watching pleasure -

Feel free to compare the videos.

A lot of people have also noticed this. What do you think has happened here and what's your opinion on Buzzfeed?

Also, what do you think of the recent copyright craziness on YouTube (copyright strikes, Fine Brothers etc.)? Do you think this could become something more (hopefully not!)?

In my opinion, all of these things are probably just coincidences and people do similar stuff all the time and there's probably someone on the internet that had already one of these things before GMM and Buzzfeed did anything but I just thought that this was something to talk about. People have the same ideas for videos all the time but the videos will be different somehow. Gaming videos are a wonderful example - people will play the same games all the time and post their videos to YouTube. It's their reactions (and execution/edit of the video, I guess) that make the difference.

Note - I will point out these two things -

Rhett and Link have actually said that they've used Buzzfeed as a source before, in the Good Mythical More for "10 Things You Didn't Know Were Named After People," "Link's Funeral Tape."  I think it's pretty common for similar content creators to use the same material, and there's probably a lot of mutual copying/sourcing.  Maybe it's just understood in that realm of the internet that all the "amazing list" material is fair game.

Both Stevie and Ben of the Mythical Crew have noticed the similarities between Buzzfeed videos and GMM videos; they have tweeted about it on their personal accounts. Their tweets indicate that they believe Buzzfeed is ripping off GMM.

I can't find Stevie's tweet anymore, which was about the fast food chicken nugget videos, but here is Ben's tweet about the glow in the dark videos: https://twitter.com/BenjaminEck/status/730092146850562048 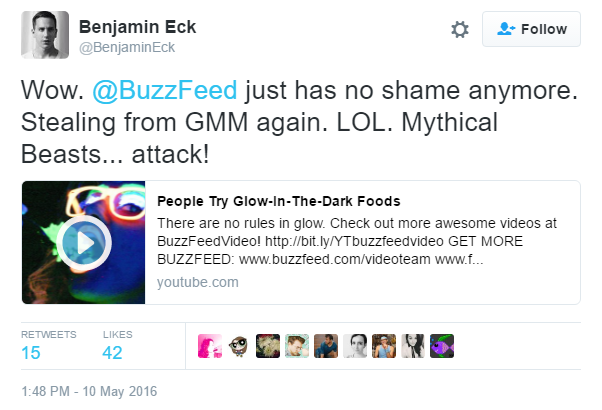 From what I've heard, in both of the above-mentioned Buzzfeed videos, a huge majority of the comments are from Mythical Beasts accusing Buzzfeed of copying GMM videos.

Here's another ladies and gentlemen! -

*It feels like it's been forever since this happened

I think the worst part is not only that they really seem to steal their ideas from GMM recently, (Because Victoria's post is right. I have seen the tweets from the crew and they don't seem to like what Buzzfeed is doing)

but that they don't give any credit to GMM!

Why not say: "Hey we saw that video and want to try it ourselves!"

Especially with something like the "Glow in the Dark" thing.

It was just too similiar with the glasses and the face painting.

And I don't think that the two examples at the end can be compared with what Buzzfeed did. :)

Because I agree with your idea that the first one was influenced by the Huffington Post (because that seemed to be a source that Rhett and Link used quite often) and the second one was just the sequel. (And maybe Buzzfeed got the idea from GMM's first Walmart Taste Test :P)

I just hope that Buzzfeed will stop stealing the content.

I first saw this from someone who reblogged it, but there's an article and a petition out about the issue from Akilah Hughes: https://medium.com/swlh/dear-advertisers-its-time-to-stop-supportin....

She has a lot more posts on her Tumblr about the issue.